In 1902, in Pittsburg, Texas, an  inventor and clergyman by the name of Burrell Cannon built the Ezekiel Airship, an attempt to create the first powered, controlled flying machine via use of biblical principles. Working with a small group of inventors and a dedicated staff at the local foundry, Cannon created his work based on the words of Ezekiel 1:16: "The appearance of the wheels and their work was like unto the color of beryl; and they four had one likeness; and their appearance was as it were a wheel within the middle of the wheel" (a passage that has inspired more than one flying saucer theory, incidentally). Allegedly achieving flight one year before the Wright Brothers at Kitty Hawk, the flyer was destroyed in a storm on its way to the 1904 St. Louis World's Fair. It is this curious sidenote to history that first-time playwright David O. Hill has chosen for his "The Story of the Century". 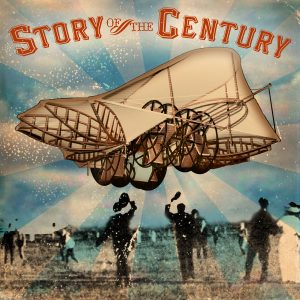 The play follows several of the town's locals: there's the newly-arrived schoolteacher, trying to get the local Christian Womens' Temperance League to sign on with the suffrage movement. The local journalist, looking for the story that will catapult him out of this small town. An African-American couple, old enough to remember slavery, trying to fight their way forward in a society that hasn't really made room for them. And front and center, of course, the Rev. Cannon and his struggles to create a flying machine.

Unusually for Fringe shows, this is a musical--or rather, half of one. It is essentially the first act distilled to fit the one hour timeframe. It also weighs in with fourteen cast members, almost unheard of for Fringe. Mr. Hill is a musician by training and inclination, and so the show is filled with songs. "The Sky's The Limit" gets clever reprises as the frustrations of the build process mount up, and "One Hundred Years from Now" expresses both optimism and pessimism in turn for what is now our past.

The lyrics do occasionally slip into almost-rhymes, or stumble somewhat in the meter, but for the most part they work. The show takes an affectionate approach to the denizens of Pittsburg, perhaps a bit more than they really merited. There are a few factual errors (Cannon was not the sole designer, only $20,000 in stock was raised), and the actual flight with which the Ezekiel is credited--with no photographs, its creator elsewhere, and only a few witnesses allegedly sworn to secrecy--is generally discounted by all but the people of modern-day Pittsburg, who know a good story when they hear one.

Still, the story makes an interesting jumping-off point to look at the march of progress, what changes or stays the same, the eternal tug-of-war between old and new. Story is lighter material, an interesting diversion for the history buff, inoffensive and unchallenging. Think of it as a palate cleanser to be enjoyed between courses of the heavier fare the Fringe has to offer.